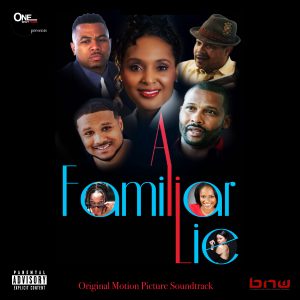 The film, featuring renowned actor/producer, Omar Gooding, award-winning actor/producer Trae Ireland, veteran comedic actor Walter Franks, and introducing Kietta Mayweather-Gamble, is produced by One Shot Films in association with Ireland Entertainment. A Familiar Lie revolves around the story of Camille Rogers, a beautiful and devoted wife who suspects her husband is having an affair when really he’s entered into a life of street crime in order to elevate their lifestyle. After he’s killed in a drug deal gone bad, Camille seeks to avenge her husband’s untimely death.

One Shot Films CEO Curt Elerson and BNW Records Founder and International Recording Artist, Shyan Selah, have long collaborated over the years in music and live event productions. In addition to an executive producer role for the film soundtrack, Selah’s track “Sweet Little Lies” is included as the film’s theme song amid a collection of eclectic hip hop from some of the hottest artists spanning the country and features from Grammy winning producers Dunlap Exclusive and Focus. Stand out artists include Suga Free, Brian Angel of Day 26, Rufus Blaq, Suga T of the Click, and Omar Gooding performing as Big O.

“The soundtrack is going to be super-hot with some very well-known national artists bringing the heat,” says Elerson whose film Paper in My Pockets is currently the number one streaming movie on XUMO’s black cinema selection (Universal/Comcast). “It’s great to reunite with Shyan and the Brave New World family to collaborate on ‘A Familiar Lie’ soundtrack. When Shyan asked me who was doing theme song, I didn’t hesitate to say you are! I knew he would nail it and give me just what I wanted and that’s what he did. ‘Sweet Little Lies,’ the theme song is a great compliment to the film.”

“There’s some serious talent involved in this film,” says Selah. “This is just one of many moves being made right now. Curt is a lifelong friend and co-player in this industry. I’ve always admired his hustle and never-say-die attitude. I was excited to be a part of the soundtrack from top to bottom and whipped up something fresh for the theme song. We’ve done a few together already but I think this marks a new creative rhythm for many more to come.”